Recent screenings:
* November 13, 2008, as part of a "Food & Community" panel. This event was part of the Fair Food Film Festival held in the Kalamazoo Public Library in Kalamazoo, MI.

* April 5, 2008 at the Greater Midwest Foodways Alliance at Kendall College in Chicago, IL.

* March 16, 2008 at the East Lansing Film Festival in East Lansing, Michigan. Read the review from the Lansing State Journal.

* March 9, 2008 at Lake Michigan College in South Haven, Michigan, for the Film Institute of South Haven and South Haven Center for the Arts.

* January 23, 2008 presented through the "Screen Gems" series by Digital Arts Film and Television (DAFT) at the Farmington Community Library in Farmington, MI.

* June 5, 2007 at Kalamazoo College. Approximately 150 people attended, including the reception that followed.

**Thanks to everyone who attended our premiere on April 27, 2007! That date happened to be exactly one year to the day of when we spent 24 hours in the shop, talking to everyone who came through the door and worked behind the counter. The screenings were sponsored by the Kalamazoo Film Society. If you were one of the 400 people there, we'd love to hear your comments! And check out the photos from the event.

> Also, consider purchasing your own copy! 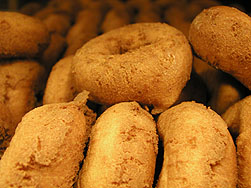