Bakers rise early to mix the dough and start the fryers, but who else is hanging around a local 24-hour donut shop? And what is the obsession with this sugary delight? DONUT DAY: 24 Hours at Sweetwater's, a recently completed documentary introduces us to the characters behind and in front of the counter, leaving more than a few crumbs along the way.

To get a real feel for the life cycle of Sweetwater's Donut Mill, the shooting of DONUT DAY took place in a marathon-like shoot of 24 hours straight on April 27, 2006, at the Stadium Drive location. We premiered the documentary exactly one year later. Other screenings are not far off!

Things we were curious about :

• The bar-like atmosphere in a place that doesn't serve alcohol.
• How a small business survives in an age of franchises and national branding.
• How to make money when your main product costs less than a dollar.
• How donuts fit into the average American diet.
• What goes on in the kitchen of a 24-hour donut shop.

• What is YOUR favorite donut?

To contact the producers of DONUT DAY: 24 Hours at Sweetwater's, please send an email to donutday@donutdaydoc.com.

The project was funded/supported in part by:
* Arts Fund of Kalamazoo County grant through the Arts Council of Greater Kalamazoo
* Kalamazoo RESA Education for the Arts
* Kalamazoo College
* Kalamazoo Film Society 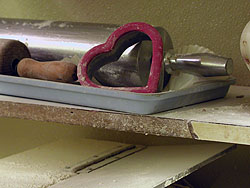 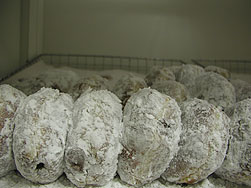